The weekend after I received my “asthma diagnosis” for the second time, despite my growing doubts, I went downhill fast.  After two days on Symbicort I really started to struggle.  I had brunch with a friend on Sunday morning and after talking during brunch I literally couldn’t talk for the rest of the day.  And Monday just got progressively worse.  I emailed my pulmonologist in a bit of a panic, because the inhalers were not really touching my breathing problems and my flushing kept getting worse with every meal as well.

By the time M got home from work Monday night, I felt really bad.  There was no way I could get up and walk around, much less cook dinner, and I was seriously craving comfort food so he agreed to bring me the essentials  – a baguette, cheese, pate, some cornichons, some wine and chocolate.  I know, not the healthiest of meals, but I had been really suffering and felt like I deserved a little indulgence so no judging.   After eating, things quickly went from bad to worse.  I started flushing profusely and in a strange pattern: 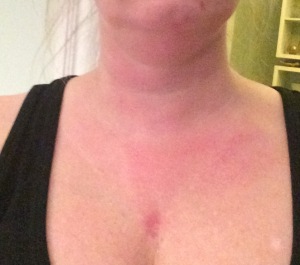 The flushing appeared to originate in a dime-sized spot in the middle of my chest.  As you can see from the picture, there is a red cone of flushing that extended upwards from this spot into my chest, neck and face.   Interestingly, the red spot on my chest is the same location that the Octreoscan indicated was suspicious for a neuroendocrine tumor. 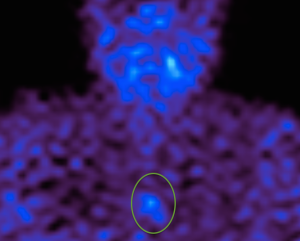 Carcinoids (like the one I suspect I have) can release substances, like histamine and serotonin, which can cause flushing and which in large doses are toxic.  Do I think the Octreoscan and the flushing are related at this point?  Hell, yes.  How can they not be?  A dear friend of mine calls this picture a treasure map – my body is trying to show the doctor where to start digging!  Does any of this mean anyone is going to finally take me seriously?  Time would tell.

Within two hours of eating it was clear I had to go to the ER.  I felt like I was on fire and I was having a very hard time breathing.  There was no way I was going to be able to get enough air to make it at home through the night.  M and I hopped in the car and went in.  I was really struggling for air and beet red and got through triage and back into a bay in the ER very quickly.  My blood pressure was 222/119 which set off a bit of panic in the ER (for those of you with limited knowledge of BP, 180/110 and above constitutes a hypertensive crisis and requires emergency care).

I described to the head ER doctor what had been going on and after hearing my brief history and seeing my flushing he right away started the workup for a pheochromocytoma (another endocrine tumor that can cause fatal spikes in blood pressure).  I later discovered that they also tested me for every illicit drug and toxin on the planet.  Although I may have OD’d on cheese, I certainly was not in there because I had a little too much cocaine, folks.  And despite the fact that I said carcinoid 80 times while I was in there, and the fact that carcinoids can also cause hypertensive crises, the only thing he didn’t test me for was…you guessed it….a carcinoid.

As doctors were running around ordering tests and the nurses were trying to get an EKG, I started to feel an adrenal crisis coming on.  I got lightheaded very fast, started getting a really bad stomach ache, and salivating like I was going to start throwing up rapidly.  M and I right away started telling them I was going into crisis and they needed to get a shot and get it NOW.  The ever-prepared M, having been through this before, whipped out my emergency letter and told them I had a shot ready in my purse if it was going to take them a long time to get going.  The nurse was getting annoyed as she was focused on getting my EKG and kept ignoring me and telling me to wait…until my body locked up and I started screaming involuntarily.  It thankfully didn’t take them long to get the shot after that and after blowing out two sets of veins in my hand (I was so seized up I couldn’t relax my rigid arm and stay still enough for them to get the IV in), they finally gave me Solu-Cortef and I quickly returned to “normal.”  The ER nurse who had been rude and dismissive later came back in to tell me she spent her whole dinner break learning about adrenal crisis and had no idea how serious it was until she saw what happened herself.   I am choosing to count that as an apology.

The Solu-Cortef got me back to my pre-ER state:  still having trouble breathing if I moved, still flushed, but stable.  My blood pressure was all over the place – from too low to too high, but no longer in the crisis range.  I spent 20 hours in the ER and then was transferred to a room in the cardiac ward so they could figure out what was wrong.

It was really clear to me what the prime suspect was at this point.  The Octreoscan indicated there was a tumor in this area.  And thymic carcinoids are a part of the constellation of tumors that MEN-1 patients can get (and I was in the middle of a MEN-1 workup).  The skin on my chest looked like the flushing was originating in the same area that was suspicious on the Octreoscan, I had classic carcinoid signs (flushing, breathing trouble, coughing).  Furthermore, foods like wine, cheese, pickles, and chocolate – all foods I ate that night – can set off a carcincoid hypertensive crisis.  Finally, the “asthma” I had been diagnosed with was not responsive to asthma medication.  It seemed like such a no-brainer to me that I was very confident a few days in the hospital and the right tests, which would obviously get ordered, would get this all sorted out and I would be on the road to getting this taken care of.

One thought on “A treasure map leading to the ER”