For a lot of Cushing’s patients, the hardest thing to deal with after surgery is uncertainty regarding whether you are actually in remission or not. This might be very difficult for family and friends that never had Cushing’s to really understand.  You had surgery, a tumor was removed – how can you not tell if you are better?

Well, it is just not that simple!   For starters, the pituitary gland has just been sliced up like a loaf of Wonder Bread (literally – in addition to removing tumors that have been located in advance, most surgeons explore the gland during surgery to make sure no other tiny tumors are missed) and it needs time to recover.  If you had knee surgery and the surgeon sliced your knee up in multiple locations, you wouldn’t expect to just pop out of the recovery room and start skipping around.  Recovery from  pituitary surgery is no different…except for the fact that the pituitary gland is the “master gland” controlling a huge variety of your body’s functions.  There are all sorts of neuroendocrine signals that your pituitary gland is supposed to be regulating but it is not able to.   So, post-op, you are emotionally unstable, tired all the time, can’t sleep properly, your whole body hurts….Gee, sounds a lot like Cushing’s!

Recovery also takes a long time because in addition to the fact the pituitary gland needs to heal, it also needs to get back into equilibrium with the organs it controls (e.g., the thyroid, the adrenal glands) and the organ that it is controlled by (the hypothalamus).   The pituitary gland is the central part of a whole set of delicate feedback loops that are responsible for the regulation of many processes necessary for survival and reproduction.  Getting this feedback loop to function normally can take many months.  In many patients, the feedback loop will never work properly again.  Just like with knee surgery, it is often the case that after a recovery period of six months or more you will be able to walk just fine on your damaged knee.  That doesn’t mean you will necessarily be able to run on it ever again.  The pituitary gland is no different.  Surgery is necessary but it is unlikely to restore your gland to it’s pre-damaged state.

One thing that really makes recovery from pituitary surgery (and surgery for Cushing’s in particular) so damn slow is that Cushing’s messed with the hypothalamic-pituitary-adrenal (HPA) axis long before the surgeon started poking around in your head.   In a healthy person (in the following graph), if your cortisol level is too low, the hypothalamus secretes CRH which tells the pituitary gland to secrete ACTH.  In turn, the additional ACTH is a signal to the adrenal gland to spit out more cortisol.  Once enough cortisol has been secreted, the hypothalamus then stops secreting CRH, which signals the pituitary to stop secreting ACTH, which signals to the adrenal gland to stop secreting cortisol too.  This process of adjustment and readjustment occurs in a seamless and continuous fashion in a healthy person. 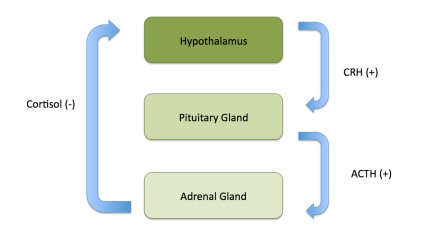 In a person with an ACTH-secreting tumor, this feedback loop gets hijacked by the tumor.  No matter what signals the pituitary receives from the hypothalamus, the tumor is going to continue to spit out ACTH whenever it feels like it.  In response, the adrenal gland will continue to spit out cortisol.  The adrenal gland can’t tell that the signal is from a tumor, all it knows it that it keeps being told to secrete more cortisol.  The hypothalamus tries to stop this process by stopping the secretion of CRH (and likewise the healthy pituitary will stop the secretion of ACTH).  But it doesn’t matter, because the tumor will just keep pumping out ACTH.  The best thing the healthy part of the pituitary can do at this point is basically hibernate, which is what it does.  And the feedback loop is broken.

After pituitary surgery, the tumor is no longer disrupting the normal HPA feedback loop.  However, the pituitary gland is still sleeping for awhile – both because of the surgery and because the healthy part of the gland stopped producing ACTH after the tumor took over during Cushing’s.  As a result, even though more cortisol is needed, the adrenal glands are not receiving a signal from the pituitary.  And cortisol is needed to sustain life.  Eek!!

The pituitary needs to be slowly and carefully nudged back into action.  And so, after surgery patients need to replace the cortisol their bodies should be producing on their own until the pituitary wakes up.   This process takes months and months and involves slowly lowering the dose of synthetic cortisol (typically hydrocortisone) little by little to try and force the pituitary to wake up.  The process is painful because to force the pituitary into action it is necessary for cortisol to be too low so that the hypothalamus and the pituitary get the signal they need to get into gear and secrete CRH/ACTH.   And low cortisol feels like the flu and can be dangerous if it gets too low.

Add to all of this mess the fact that Cushing’s did systemic damage to your body.  It destroyed bones and muscles and brain function.  It suppressed your immune system.  It caused you to gain a lot of weight and might have left you with hypertension and diabetes.  These problems don’t just go away overnight.  It takes a lot of time for the body to recover.  If everything goes according to plan, patients are looking at a 9 month to two year recovery period.  And things rarely go according to plan….

10 thoughts on “Why is recovery from pituitary surgery so damn slow?”